A flight levy of £30 per tonne of carbon on all flights will be separately recharged to departments. A flight reduction target of 35% by 2035 has been set.

Consider this travel hierarchy when contemplating travel to reduce the environmental impact. Reasonable adjustments and exceptions may be applicable.

Reduce your travel – consider these possibilities

Travel without flying – consider alternatives for travel within the UK, to Europe, or within other countries:

Fly when there are no alternatives - and consider the 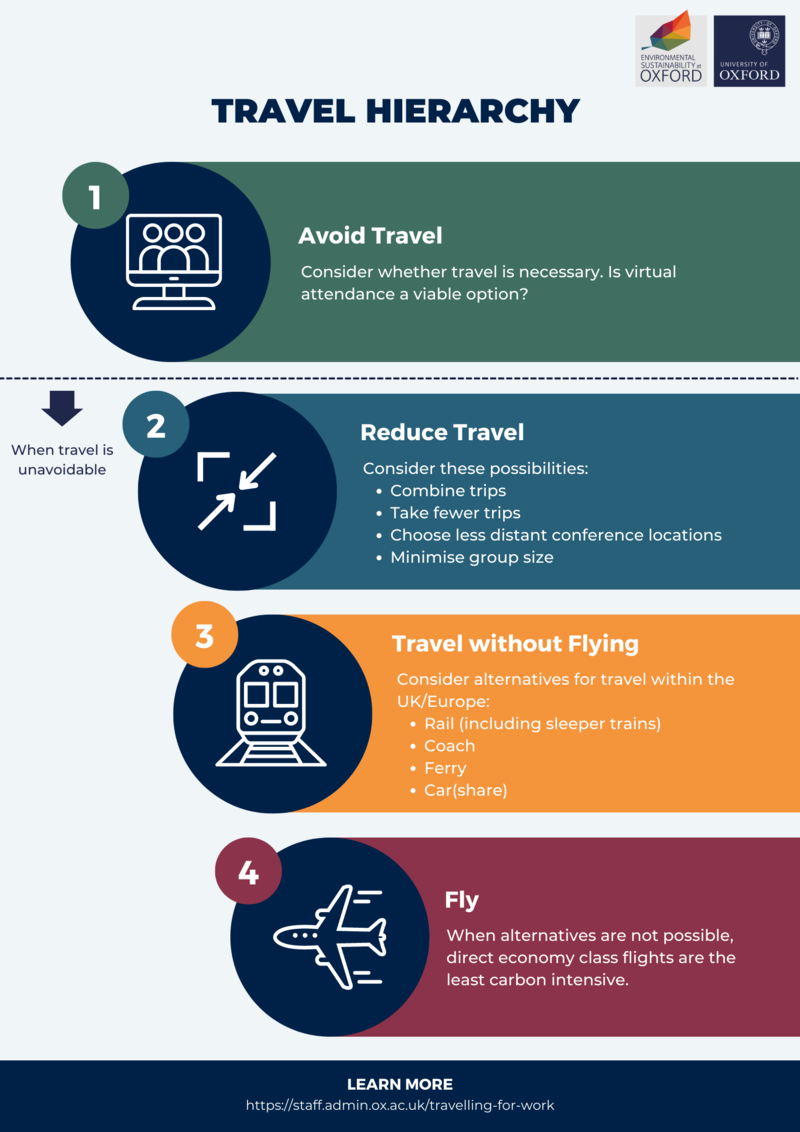 The flight levy rate will be reviewed every two years.

For assistance in estimating flight levies, view a list of estimated levies to common destinations or use the carbon emissions calculator.

The flight levy will be recharged to departments monthly after flights have been booked or reclaimed through expenses.

The University has set a target of reducing emissions from flights by 35% by 2035 against the 2018/19 travel baseline with interim targets of:

To reduce flights, unless exceptions or reasonable adjustments are applicable,

All departments will be expected to meet this target by considering:

Why do we need a Travel Policy at the University?

Why do we need a Travel Policy at the University?

What changes to travel are included in the travel policy?

How much is the flight levy?

The flight levy is calculated at £30tCO2e (carbon dioxide equivalent emissions). As an example of this, the carbon emissions of a return economy class flight to New York is 2.13 tCO2e. This would result in levy of £30 x 2.13=£64. Estimates of flight levy amounts  .

Why is the levy not charged on rail travel?

The Travel Policy focuses on reducing the highest emitting mode of travel, flying, and promotes rail where possible. The carbon emissions from rail are much lower than flights. For instance, Eurostar emissions for London to Paris are 91% lower than the equivalent flight.

The flight levy was initially proposed to the Environmental Sustainability Subcommittee at three levels of £30/£50/£70 tCO2e. The lowest level was approved to reduce the burden to departments. The flight levy amount will be reviewed every two years, taking into account carbon pricing levels.

Will my department be charged the levy before I have even travelled?

Once the booking has been completed, your department will be recharged by the end of the following month, regardless of the date of travel. If any changes are made to the booking, you will not be charged any further flight levy. If the booking is cancelled and the flight levy has already been recharged, it will be reversed by the middle of the month following the cancellation.

Yes, the flight levy must be paid regardless of any departmental offsetting. Offsetting is not considered a long-term solution to climate change. Our approach is in line with the Oxford Principles of Offsetting which supports prioritising reducing emissions over offsetting to minimise the need for offsets. The Travel Policy’s flight levy will be used to reduce emissions. Offsetting will only be used to fully offset the University’s residual carbon emissions and biodiversity impact from 2034. It is recommended that departmental funds used to offset flights are instead used to pay the flight levy.

Where does the flight levy go to and what will it be used for?

Are other Universities charging a flight levy?

Will departments have to calculate their own levies?

No, Estates finance will calculate the levy and will recharge the levy.

Will my department be charged a levy for flying on or after 1 August 2022, where the booking was made before 1 August 2022?

How much is the levy likely to cost my department?

It is expected that the levy will add approximately 10% to the cost of flights. For departments with high levels of business class flights, this figure may rise to 15%.

What does my department have to do to implement the Travel Policy and the flight levy?

What is the methodology for calculating carbon emissions of flights?

The methodology   has been defined.

How do I query the flight levy charged to my department?

Departments can raise any flight levies queries by emailing travel@admin.ox.ac.uk or calling 01865 614814.

Will departments have access to information on their flights and flight levies?

At the end of the first year, each department will receive a report on its flights. This will provide departments with comprehensive data on departmental flights.

Research grants and the flight levy

Research grants and the flight levy

How will the flight levy be recharged?

Estates Finance will recharge the flight levy monthly to the cost account nominated by a department. Each department will be required to nominate a separate cost centre, or the default cost centre will be used, to which all flight levy recharges will be charged for Key Travel flights, other travel provider flights, departmental credit cards and expensed claims.

When will the recharges be made, what information will be included in this?

The recharges for each month will be completed by the end of the month following. The recharge detail will include detail such as name of person, brief flight details, cost centre.

What information will be supplied in the levy recharge

Do we have to use Key Travel for all travel bookings?

In addition to Key Travel, you can also use two other travel agencies that are contracted suppliers,

Our department does not use Key Travel; how can we do so?

My department is unhappy with Key Travel; how do we complain?

Why should we use Key Travel? what are the advantages?

Value for money and sustainability

Value for money is the optimum balance between cost, quality, risk, and environmental sustainability.