Almost 2,000 employees at the University of Oxford will receive a pay rise as a result of the University signing up to pay the Oxford Living Wage from 1 August 2020

Introduced by the City Council, the Oxford Living Wage (OLW) is an hourly minimum pay that promotes liveable earnings for all workers, recognising the high cost of living in Oxford. The rate of pay, set annually at 95% of the London Living Wage, is currently £10.21 an hour. The University, as the largest employer in the city to gain OLW accreditation, will significantly increase the number of employees in Oxford receiving this minimum hourly rate.

From August 2020 people working in a wide range of roles across the University will benefit from this higher rate of pay, including office and clerical support staff, library assistants, security staff, technicians and retail workers. The University will also initiate discussions with suppliers regarding a move to Oxford Living Wage where practicable. The five-year cost of implementing the Oxford Living Wage for University staff is calculated at £5.5m. 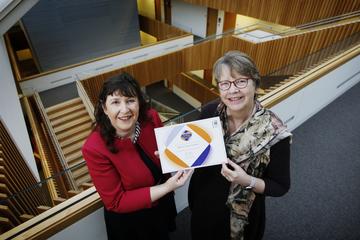 Professor Anne Trefethen, Pro-Vice Chancellor for People and Gardens, Libraries and Museums, says: ‘There are many wonderful things about Oxford that make it an attractive place. However, it is known as being a city that is expensive to live and work in.

‘Recognising this, I am very happy that the University Council has approved the introduction of the Oxford Living Wage for University staff, demonstrating our commitment to fair pay for our employees.’

The University’s apprentices, currently numbering 151, will also receive the Oxford Living Wage from August. Clive Shepherd, Apprenticeship Manager says:  ‘Oxford University Apprenticeships have long been a fantastic way to start your career at a world leading institution, delivering great opportunities for over 300 local people in the last five years.

‘We hope the Oxford Living Wage will enable people from all sections of the community to benefit from the career pathways our Apprenticeships offer.’

Councillor Susan Brown, Leader of the City Council, says: ‘I’m delighted that the University of Oxford has signed up to pay the Oxford Living Wage. This is a huge commitment from one of the city’s biggest and best known employers, and will have a positive impact on hundreds of people they employ.’

The Oxford colleges are independent employers and will make their own decisions about the OLW, but discussions are ongoing. St Cross College and Campion Hall already pay the OLW, and many more colleges pay the Living Wage Foundation’s Real Living Wage.

‘Conference representatives supported the University’s decision in the Council meeting which decided on the matter of implementing the Oxford Living Wage.’