The competition, run by the Zoë Ball Breakfast Show, invites children aged between 5 and 13 to compose an original work of fiction in no more than 500 words.

This year, the Oxford Children’s Dictionaries and Children’s Language Data team’s analysis of the stories identified ‘Brexit’ as the 2019 Children’s Word of the Year.

Nilanjana Banerji, Dictionaries Development Editor, and Samantha Armstrong, Senior Dictionaries Publisher from OUP, led a team of expert lexicographers and children’s language experts to investigate the 113,000 stories submitted this year. For the past eight years, OUP has collected and analysed all of the words used by the young writers in the competition – which now amounts to 386 million words.

The words are all fed into the ‘Oxford Corpus’, a unique database of children’s language which OUP uses to inform its publishing. The analysis is also used to create a unique annual Oxford Corpus Summary Report which explores growing trends in children’s language, such as the rise in 2019 in the use of language around activism, and top references, such as celebrities and foods.

The members of the Oxford Children’s Dictionaries team are also thrilled to continue to partner with the University of Oxford Experimental Psychology research group ReadOxford, led by Professor Kate Nation, on the Oxford Corpus. Professor Nation’s team use the data captured in the Oxford Corpus to support research into children’s reading and literacy, taking regular opportunities to explore these results with OUP teams.

On Friday 14 June the live final of the 500 Words Competition took place at Windsor Castle, introduced by honorary judge the Duchess of Cornwall.

To read the winning stories, and view clips of them being read out by celebrity judges, including David Walliams and Michael Sheen, visit the BBC website. 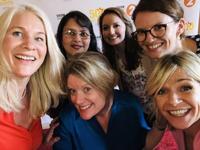