Jackie’s book for children – which celebrates the University’s patron saint –has won an international publishing award. 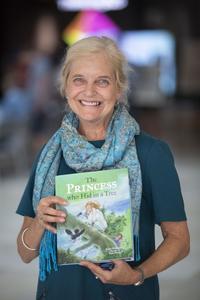 Jackie with her award-winning book

Jackie’s book, The Princess who Hid in a Tree, which celebrates the University’s patron saint, has recently won an international publishing award. Illustrated by the artist Alan Marks, and published in 2019 by the Bodleian Library, the book was awarded the Gold medal in the Children’s Picture Book category of the 2020 Illumination Awards.

Visitors to the Cathedral, or to the Cathedral website, can discover Frideswide’s story through a stained-glass window designed by the pre-Raphaelite artist, Edward Burne-Jones.

However, many Oxford residents (both town and gown) have little awareness of the saint, whose name means ‘great or strong peace,' which is why Jackie decided to write the book for local and visiting families.

For several years, Jackie has been used to writing educational materials and books, in addition to her day job, teaching students at both primary and tertiary levels. This is her first attempt at a picture book, written during the Christmas holiday in 2017. She was thrilled when it was accepted for publication, having had no idea that the Bodleian team had submitted her book for the award.

She has enjoyed sharing the book with local children, but she was surprised to receive a letter from a Catholic class in Doncaster.  As part of their Anglo-Saxon topic, the Year 5 teacher had read the book to the children, and they had been inspired to write and share their own brilliant versions of the story. The children in Doncaster could not afford a school visit to the Cathedral and lockdown has postponed Jackie’s planned visit to meet them. However, she and her team are working on the idea of a ‘Pop Up Cathedral’ workshop for schools and Jackie hopes, next term, to share it with the Doncaster children,  as well as local pupils.

Christ Church Cathedral, the only college chapel in the world that is also a cathedral, is built on the site of the 7th century priory,which was founded by Frideswide to serve the community as a centre for compassion, learning, healing and worship.

The saint is commemorated every October at her annual patronal service which brings together organisations from around the county and, in 2019, the Cathedral launched an annual pilgrimage in her honour, which generated a great deal of interest and was well-attended.

Ruth talks about the 10-part series she made for Radio 4 – in her spare time! 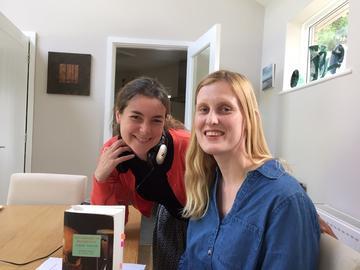 (From left to right) Ruth Abrahams with Presenter Amy Liptrot

In 2018, when working at the Department of Psychiatry as their communications officer, John Geddes, Head of the Department, asked, ‘Have you ever heard of this book?’ 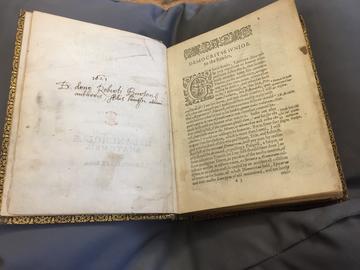 The Anatomy of Melancholy

He handed me a three-volume, leather-bound edition of (Oxford scholar) Robert Burton’s The Anatomy of Melancholy. Flicking through, I noted the intriguing categories of ‘kinds, causes, symptoms, prognostics and cures’ of melancholy. And no, I hadn’t heard of it.

Coming up for the 400th anniversary since it was published in 1621, John mentioned that the content had fascinated him for years. My interest was piqued – especially being surrounded by ground-breaking research attempting to better understand and treat mental health disorders today.

I had joined the University from Radio 4 Interactive and had worked in radio for 10 years, producing a range of programmes for BBC Radio 4, 1Xtra and the World Service. After many years of small children and budget juggling, I thought it might be the time to try dipping a toe back into that world. Having children at school frees up finances and headspace in a way that’s hard to overstate.

I pitched it through former collaborators, Whistledown Productions, and amazingly, the Radio 4 commissioners said yes. I had a 10-part series to make.

What emerged – after 18 months of working in time stolen from evenings, early mornings, weekends and annual leave – is a series that looks at causes such as: ‘heredity’, ‘poverty and want’, ‘terrors’, ‘inflammation’ and cures such as nature, ‘mirth and merry company’, ‘divine music’, sleep.

The backdrop to production was the febrile atmosphere of Brexit, while the final stages were completed at the start of lockdown. It was broadcast in May 2020 as the nation stayed indoors and, perhaps more than ever in living memory, were drawn to the warmth and human connection offered by radio.

Responses from listeners have been overwhelming and the tone, which was intended for a country torn apart by the bitter divisions of Brexit, found an audience united in fear and bewilderment by a global pandemic.

The messages of encouragement and the multiplicity of strategies which Robert Burton offered his readers 400 years ago, translate astonishingly well to current times – even if not quite the ones originally envisaged.